Posted on May 20, 2016 by nigel hetherington| Leave a comment

When one of my mentors was describing an unusual method of working with someone with a spider phobia, the thought experiment discussed was to lock the client into a room for 24 hours with said spider. I suspect neither the spider in question of the hypothetical spider phobic would have been thrilled at the prospect.

We went on to discuss that after a set period of time neither being able to prevent their responses or escape from them there would be a transformation. This is a reminder to the old and no longer applied psychological change process of ‘flooding’. Where people are forced to physically be with and confront their anxieties and fears. Similar horror stories for the treatment of OCD were once used too. 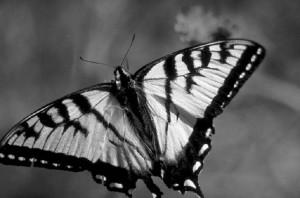 So as this post is about anxiety or the semi-unconscious pattern of relational thinking which often creates unpleasant emotional responses; did the ideas in the first paragraph cause you any unpleasant emotions? How did you respond?

One Metaphor for Anxiety

I want to start with one of my metaphors for anxiety. By just using the word anxiety we at best have a generalised idea, a generic psudo-experience of what anxiety may mean for any individual. Think about that in relation to the first two paragraphs.

Some years ago Chaos Theory became very popular with the public in the idea that a butterfly in some distant county, in flapping its magnificent wings could cause a hurricane somewhere else on the globe.

The idea comes from a Strange Attractor phenomena discovered by Edward Lorenz. In his work the mathematical pattern which can be thought to look like butterfly wings are a series of 3 dimensional points plotted within a enclosed space.

What is amazing to me is the lines plotted as the scale of the plot becomes ever and more infinitesimal is that the lines of the plot will never touch each other. That is to say there is an infinite length of line inside a confined space.

This can seem mind boggling like what actually happens when an unmovable object meets and unstoppable force. And this is what anxiety can be like. Confined and continuing with no way out.

No one suffering with anxiety is having a great time. Fantastic energy is being consumed in looping thoughts and thinking which drive emotions which drive thoughts. Metaphorically a Lorenz Attractor.

We know intuitively that our thoughts can effect what we are feeling and equally or feelings and body positions can effect out thoughts. This can be a vicious spiral.

Anxiety is Not a New Problem for People

In his extensive work Jiddu Krishnamurti offers many self inquiry based explorations of the nature of thought and thought in its proper field. ‘Thought will set a limit and then thought will transcend that limit‘ again metaphorically a Lorenz Attractor, infinite distance within a confined field.

In working to resolving our own anxieties in the psycho-somatic field it is important to realise that the thinker of thoughts and the thoughts are not two distinct entities they are one. Practically all eastern spiritual practices have know this for thousands of years.

It is also possible to observe our own thoughts, practices common in meditation again prevalent for thousands of years. Knowing that the thinker of thoughts and thoughts are one makes it possible to explore our own internal self relationships.

Alan Watts talks about the Wisdom of Insecurity and having our material needs like a roof over our heads, enough food and pretty much the rest is all psychological. So he is pointing towards our psychological world where imagination can feel tyranical.

Knowing there really is no such concreteness as security because we can all have worries about the future and regrets about the past, wouldn’t it be quite wonderful to live more in the now, more in the present and knowing the proper limits of thought?

There are literally countless ways of utilising hypnotherapy to relate our self to our anxities. A central idea is opening and shaping a hypnotic space where some form of transforming can become possible. Helping to alter the seemingly fixed focus of anxious thoughts.

In experiencing anxiety I believe that in some way we are trying to cope or are simply responding in the best way we can at the time. Hypnotherapy is one of many ways to explore not just new strategies but different ways of coping and living differently.

Our mind in some real sense is limitless. It contains our thoughts, memories and a life time of experience. All this ‘stuff’ is in there and mostly available with the properer stimulus. There is a lot of space. And mind can also focus intently on some experience so finding ways to alter unhelpful focus, as in anxiety, is also a real possibility.